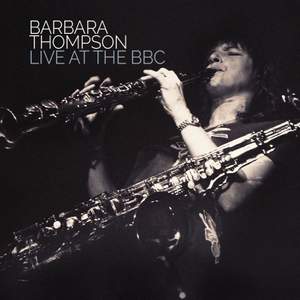 New, Live At the BBC

Recording of the Week,  Barbara Thompson at the BBC

A staggering 14 CD collection of saxophonist Barbara Thompson's music, recorded by the BBC over a 21 year period. With a biography due in 2021 this is an ideal introduction to this multi-faceted artist's oeuvre.

Over 100 remastered and restored tracks from 1969-1990 together for the first time on one release.

Barbara Thompson MBE is a virtuoso saxophonist, composer and bandleader whose career has spanned five decades.

Despite her battle with Parkinson's Disease, Barbara's vast career has seen her perform, compose and lead on many projects including The New Jazz Orchestra, The United Jazz & Rock Ensemble, Jubiaba, Paraphernalia, Andrew Lloyd-Webber productions and Colosseum. She is considered a pioneering composer for the saxophone and was part of a luxuriant crop of new jazz composers in the 1960s: Mike Westbrook, Neil Ardley, Graham Collier, Mike Taylor, Michael Garrick and several more. Within a few years, Barbara would be among the most eminent of them, and by far the most prolific. This previously hidden treasure trove of Barbara Thompson recordings amounts to 14 CDs containing complete radio programmes recorded and broadcast by the BBC over a period of 21 years. Many come from Barbara's own tapes, preserved by her husband, legendary drummer Jon Hiseman, in their archive at Temple Music, while others have been gathered from private collections across Britain and Europe.

The material ranges from a live concert by the New Jazz Orchestra, introduced by Humphrey Lyttelton, in February 1969 to a set by Paraphernalia, featuring Jon Hiseman and keyboard player Peter Lemer, dating from June 1990. Along the way are such rarities as: a set of compositions by Mike Taylor, broadcast in 1969 as a tribute following his then-recent death; Improvisations for Octet and Strings (1970); Five Movements for Jazz Ensemble (1971), conducted by Neil Ardley and introduced by Ian Carr; several broadcasts from the mid-1970s by Jubiaba; and many sets by Paraphernalia in its various forms including a complete concert broadcast live from Holland Park, mastered to the highest level, with extensive liner notes by celebrated jazz critic, broadcaster and saxophonist Dave Gelly MBE.