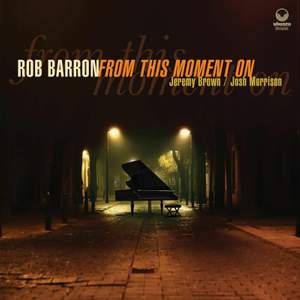 From This Moment On

Rob Barron is a mainstay of the London jazz and studio scene. Constantly in demand, he is a first call pianist highly regarded for his improvisational flair, innate musicality and a deft touch that reveal influences inspired by Blue Note greats Cedar Walton, Wynton Kelly and Sonny Clark.His love for the piano came at an early age and quickly developed into a prodigious talent for musical expression, anchored by a deep respect for musical history and culture. Graduating from Leeds College of Music with a BA Hons in Jazz Studies, Rob received the prestigious College Award for Outstanding Performance and went on to gain his Master's Degree in Music Performance at The Guildhall School of Music and Drama.Rob has flourished in the rich environment of the London jazz scene, entertaining audiences by performing with visiting American jazz musicians Phil Woods, Grant Stewart, Patti Austin, Al Jarreau, Marlena Shaw and John Marshall to name a few. He has also toured the UK with outstanding saxophonist Dave O'Higgins, who is also an Ubuntu Music artist. Featuring on many movie soundtracks, most prominently Baz Luhrmann's adaptation of The Great Gatsby, Rob's session work includes such names as The BBC Big Band, The Royal Philharmonic Orchestra, Jamie Cullum, Claire Martin, Liane Carroll and Rachel Portman. He has appeared on more than thirty albums. A sought-after sideman in a huge number of London based groups, Rob felt a growing and powerful desire to expand the music he loves in a direction he could define on his terms. The Rob Barron Trio was formed 2012 with drummer Josh Morrison for exactly this purpose. Performing regularly at Ronnie Scott's jazz club, their engaging blend of musical creativity led them to open for The Louis Hayes Quartet, The Kenny Barron Trio and Cecile McClorin Salvant. Rob's first album, What's in Store, was released in 2016 and featured Colin Oxley on guitar, along with Stacey Kent sidemen Jeremy Brown and Josh Morrison. It met with critical acclaim and respected jazz critic Peter Vacher