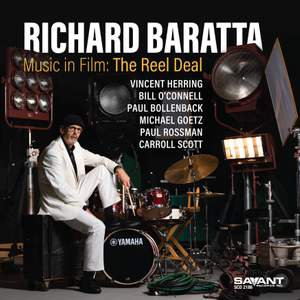 Music in Film: The Reel Deal

Loesser: Luck Be A Lady (Guys and Dolls)

Rota, N: Theme from "The Godfather"

E.Y. Harburg, Harold Arlen: If I Only Had a Brain

Bernstein: Maria (from West Side Story)

Rodgers, R: The Sound of Music

'Music in Film: The Reel Deal' marks film producer and drummer Richard Baratta's triumphant return to jazz after a 30+ year diversion, during which time Baratta became a celebrated film producer of Hollywood hits such as The Irishman, Joker and The Wolf of Wall Street. This album represents the coalescence of Baratta's two two seemingly disparate worlds, a celebration of cinema through the lens of jazz.

While this album is Baratta's proper debut studio recording, Baratta was born into a musical household in Poughkeepsie, NY, studied with jazz great Jack DeJohnette and cut his teeth with gigs in the Catskills before landing in Manhattan in the mid '70s. In NYC he forged associations with musicians like John Stubblefield, Vernon Reid and Hal Galper, embracing the lifestyle of a gigging jazz musician. However, the desire for career stability led to Baratta leaving the jazz scene for his first forays into the film industry.

A gig at the famed Kaufman Astoria Studios in Queens, NY, rekindled Baratta's interest in performing and before he knew it he had a working band - the band heard here - and plenty of dates on the calendar. Featuring alto saxophone phenom Vincent Herring, guitarist Paul Bollenback and pianist / arranger Bill O'Connell the band burns, boils and cooks over a low flame on 12 tunes from classic soundtracks composed by Nino Rota, Burt Bacharach, Henry Mancini and others.

Baratta says, "Being away as long as I've been away, and then to be in the fold with some of these amazing musicians I've been playing with, I'm like a kid in a candy store right now." After hearing his Savant debut album, you'll probably develop a sweet tooth of your own for his music.