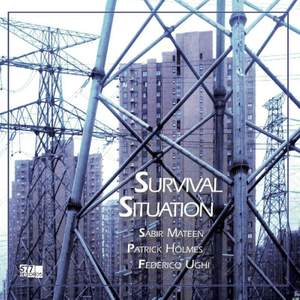 Iconic downtown sax player Sabir Mateen, together with up-and-coming Texan clarinetist Patrick Holmes and drum wiz Federico Ughi, celebrate the cosmic dimensions of creative music via their new album Survival Situation. The three musicians have collaborated in the past, in New York, in different projects but never as a trio. This time they met in a recording studio in Tuscany, Italy, not far from where Sabir Mateen has been living for the last few years. They freely improvised, then took the tapes back to the studio and created this album, strongly influenced by Sun Ra, with whom Mateen played during various times throughout the '80s until 1991. The other-worldly elements of the Arkestra's universe are found here through the way Mateen uses vocals and plays keyboard. Sabir Mateen also lists as major influences his work with Horace Tapscott from 1977 to 1981, where and when he grew to be the legendary player that we know and his association with Cecil Taylor's large ensemble from 2002-2005. Listen to the Survival Situation album, also available on limited edition vinyl, to directly connect to a legacy of magic in sound, as it projects towards the future of creative music.