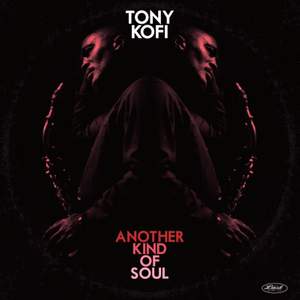 Another Kind of Soul

The transmigration of souls is a curious concept, but the soul of Cannonball Adderley must surely have alighted, Bird-like, within that of Tony Kofi. The altoist has been fascinated by Adderley... — Jazzwise, May 2020, 4 out of 5 stars More…

Alex Webb: A Portrait of Cannonball

Nat Adderley: Another Kind of Soul

Julian Adderley: Things Are Getting Better

The Record That Changed My Life,  Tony Kofi on Charlie Parker with Strings

In the first of a new series of videos, UK saxophonist, bandleader, and composer Tony Kofi, tells us why Charlie Parker with Strings had such an impact on his conception of music, and his introduction into the world of bebop.

Recording of the Week,  Tony Kofi - Another Kind of Soul

BBC and Parliamentary Jazz Awards winner Tony Kofi 's ANOTHER KIND OF SOUL traces the explosive music of Cannonball Adderley from his first session as leader in 1955 through his work with Miles Davis to the soul-jazz of the 1960s. Recorded live at Luton's Bear Club in 2019, it also features Andy Davies on trumpet, pianist Alex Webb, bassist Andrew Cleyndert and Alfonso Vitale on drums. This is the distilled version of two very special nights, immortalised by Paul Riley's recordings.The album is available in limited edition 180gm vinylthe medium of Adderley's erato best replicate the ambience of this remarkable live recording, and in digital format. The album is not called A Portrait of Cannonball as there is already one bearing that name by the great man himself. It is however, without a doubt,

Another Kind of Soul by Tony Kofi.

The transmigration of souls is a curious concept, but the soul of Cannonball Adderley must surely have alighted, Bird-like, within that of Tony Kofi. The altoist has been fascinated by Adderley since his teenage years, since when he’s developed his own blues-based, bop-driven, soul-detailed sound, a voice as robust as his hero’s, yet profoundly his own.

Kofi and his band are true to this spirit, and it’s no surprise that the highlight is the trio of Adderley tunes that take up the second half of the record: Things Are Getting Better, Sack O’ Woe and Work Song, Adderley’s signature piece. Kofi is clearly relishing every bar of these classics, all of which have big memorable themes for him and the band to get their teeth into.