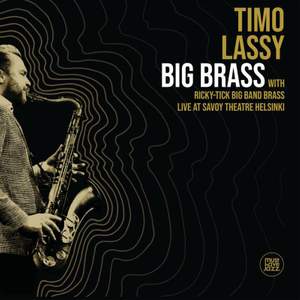 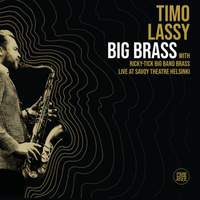 Their leader, the guitarist and composer Valtteri Laurell Poyhonen, also wrote the arrangements for the Lassy classics on this album, including ‘African Rumble’, which at 14+ minutes is twice as long as its original version found on the A side of his 2006 debut single and even more exciting. “It’s really hard to classify concerts, but I would still say that these two Savoy performances could not be better. They were and are highlights of my career,” says Lassy. “We recorded the entire concert to actually shoot live video. I had no idea that it would sound so relaxed, so good. We just had to release this music.

“Aside from the ‘Grande Opening’, which was written by Poyhonen, all compositions are by Lassy himself. The premise for the two concerts was that Lassy and his group had decided to celebrate their decade of making music together. In addition to his regular quintet featuring Georgios Kontrafouris (keyboards),

Antti Lotjonen (bass), Teppo Mokynen (drums) and Abdissa Assefa (percussion), there were eight other musicians on stage, namely the entire brass section of local heroes the Ricky-Tick Big Band. Thanks to the larger ensemble, the familiar, robust sound of Timo Lassy’s music sounds more forceful and punchier than ever, which is why ‘Big Brass’ was an obvious title for this album. The fresh

arrangements of familiar pieces and their reinterpretations point to a new musical direction with more and freer solos and less riff-based soul-feeling that delve deeper into the essence of jazz.

“The record is the perfect vehicle for Lassy to rise to the occasion as the central soloist, surfing higher on the crest of longer, more cathartic waves of musical expression”, states Finnish journalist Harri Uusitorppa in the sleeve notes.

“Encouraged by the reception of my second album, ‘Round Two’, I had a strong feeling that concentration would be the only way to bring about something consistent, and would allow me to dive deeper into music”, says Lassy. “I never enjoyed hurrying from one project to the next, even if those short-lived groups were also satisfying collaborations.” A decade later, he is, of course, fully satis-

fied with his decision, adding: “Time is of the essence, as we know. It’s best to put our energy into things that matter to us. Especially when it comes to music.”