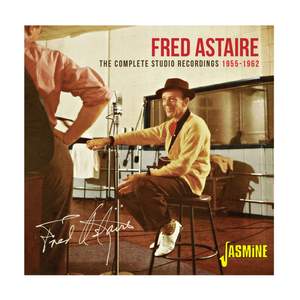 Walter Ruick, Fred Astaire: There's No Time Like the Present

Berlin, I: Isn't This a Lovely Day?

Berlin, I: The Girl on the Magazine Cover / I Love to Quarrel with You / Along Came Ruth

Gershwin: They all laughed

Arlen: One for my baby

Berlin, I: Lady of the Evening

Fred Astaire: You Worry Me

Whilst Fred Astaire's recordings from the 1930's & 40's have been re-issued many times, his releases from the mid 50's and early 60's are often overlooked. This compilation collects together all of Fred's recordings made specifically for record releases from this period and originally released on RCA, Verve, Kapp, Choreo and Ava. Includes 'I Won't Dance' and 'They Can't Take that Away From Me' accompanied by Oscar Peterson and several songs written by Astaire including 'Hello Baby' and 'You Worry Me'. All of his single releases are in their original mixes - many previous re-issues have had reverb added - along with the full "Now" LP from 1959 in stereo. Also included is a rare version of 'Dearly Beloved' from the Morris Stolloff album "Soundtracks Voices and Themes from Great Movies". The Bonus track is a rare unedited big band medley version of 'Something's Gotta Give / Sluefoot'.