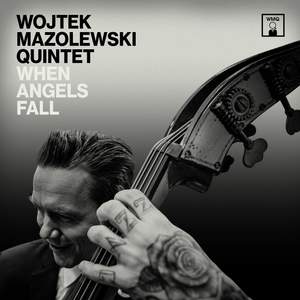 Following the rhapsodic response to Wojtek Mazolewski's debut Whirlwind release - a deluxe edition of 'Polka' which, internationally, broke through into dance clubs and rock and indie festivals - the double bassist now focuses attention on the music of his compatriot Krzysztof Komeda (19311969), a legend of Polish jazz and an illustrious Hollywood film composer. <p>'When Angels Fall' again features his inventive quintet of Oskar Trk (trumpet, electronics), Marek Pospieszalski (tenor saxophone), Joanna Duda (Wurlitzer, grand piano) and Oba Janicki (drums, percussion) as they explore the prolific output of this enigmatic and tragically departed creative talent. <p>Hear WMQ's stomping interpretation of Komeda's piano quartet tune 'Roman II' (from movie 'Knife in the Water') or their pulsating, almost ominous switch from the melancholic, choral original of 'Bariera', and you begin to understand this band's oblique, sometimes angular approach. It's a journey of constant surprises - the orchestral/vocal mood of 'Le Dpart' (from screenplay 'Start') reimagined as a softly-ebbing, horn-led ballad. 'When Angels Fall' (from Polanski's 'Knife in the Water') feels introspective, its plaintive Stanko-like trumpet melody hovering over Wurlitzer and electronics; and 'Sleep Safe and Warm' (from 'Rosemary's Baby') paints a transcendental, dreamlike aura. But the quintet's buoyancy is never far away, heard in bustling 'Memory of Bach' and radio-groove-styled 'Ja nie chce spac'. <p>Roslaw Szaybo - longtime friend of Komeda and artist for the cover of his acclaimed 'Astigmatic' release of 1965 - has designed the cover of this album, too. It's an album which indubitably teems with ingenuity and integrity; and as Szaybo confirms, "This music has come closer to Komeda than any from the past 30 years." <p>Personnel: Wojtek Mazolewski (double bass), Oskar Torok (trumpet, electronics), Oba Janicki (drums, percussion), Joanna Duda -Wurlitzer (piano), Marek Pospieszalski (tenor saxophone)