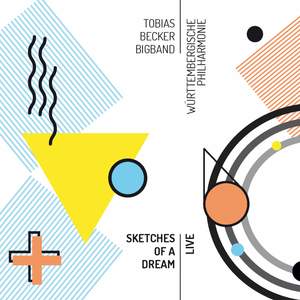 Sketches of A Dream - Live

Tobias Becker: Sketches of a Dream

Porter, C: Something to Shout About

You'd Be so Nice to Come Home to

“After releasing three studio albums and two live LPs - performed at Bauer Studios for the STUDIO KONZERT series, the Tobias Becker Bigband releases its first live-CD. For this performance the bigband was joined by a symphony orchestra of 70 members.

This ensemble of almost 90 musicians was conducted by Tobias Becker who also composed and arranged all the songs for this concert. The centrepiece of this premiere is the musical suite “”Sketches of a Dream”, which describes in three movements very strongly different phases of a dream, as the title suggests.

As a melodic addition, the voice of soloist singer Verena N bel is seamlessly embedded into the familiar bigband sound as well as the symphonic accompaniment.

Tobias Becker was able to gather some of the best young jazz musicians of Germany to present bigband jazz in perfection” (Belgischer Rundfunk - BRF).