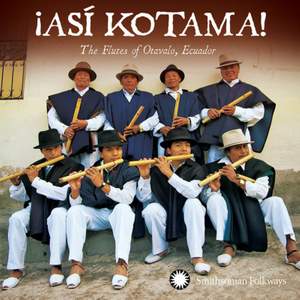 Asi Kotama! the Flutes of Ota

<i>As Kotama! The Flutes of Otavalo, Ecuador</i> features an Andean indigenous flute tradition unlike any other. It is the soundtrack of a success story that defies globalization, steers tradition in a new direction, and revitalizes a musical practice that was once considered obsolete. The joyful, multigenerational Kichwa flutists of Kotama village in the historic municipality of Otavalo play, chant, and dance their way into a future that upholds their deepest values and customs. 62 minutes, 40-page booklet with bilingual notes and photos.This album is part of the Smithsonian Folkways Tradiciones/Traditions Series of Latino music albums, produced with support by the Smithsonian Latino Center.