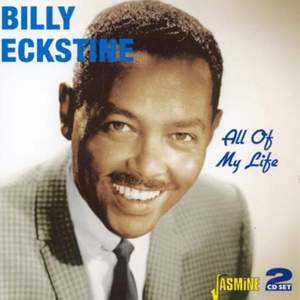 All Of My Life

Billy Eckstine was one of the greatest male pop stars to emerge from the 1940s and was a star of the concert stage, radio, television, recordings, films and night clubs. The distinguished orchestras of Nelson Riddle, Hugo Winterhalter and Pete Rugolo are featured plus all four selections from his Duke Ellington EP and his sessions with the great George Shearing. Many tracks are debuting on CD along with the major hits "I Apologise", "My Foolish Heart", "Jealousy"and "Prisoner Of Love". What's more this set also encompasses numerous show tunes such as "Younger Than Springtime", "So Far" and "Gigi".