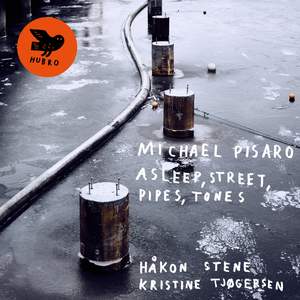 'Asleep, Street, Pipes, Tones' is a remarkably beautiful electro-acoustic work by the eminent composer Michael Pisaro (born 1961, Buffalo, New York), whose seventeen short movements - organised according to the four groupings indicated by the title - last in total for just over one hour.

Interpreted in this recording with great precision and delicacy by Håkon Stene and Kristine Tjøgersen, it presents us with a partially frozen sound world where small, even infinitesimal shifts of emphasis in an otherwise glacial rate of change appear to take on the dramatic status of major events. Observing the oscillations of sound waves as the piece's file plays out, one might see a long flat plain suddenly interrupted by vertiginous skyscraper peaks before the shimmer of reverberation decays and we're flat out on the plateau again, as if a mysterious metropolis of mile-high buildings intersected a vast expanse of sea-level swamp.

By placing the listener at the very centre of his work, Michael Pisaro is making the processes of how we receive and apprehend sound and music, his effective subject. Similarly, his interpreters in 'Asleep, Street, Pipes, Tones' are given a degree of freedom that goes far beyond the normal boundaries separating composer and performer, becoming co-creators of what he describes as "a new realisation of the piece made for and with Håkon."