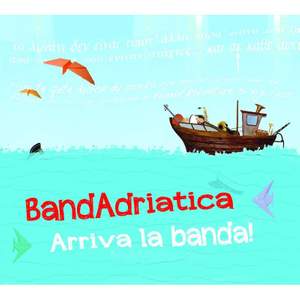 This new CD by the rebel crew guided by the melodeon player and singer Claudio Prima, who's been igniting the squares of half of Europe for the last five years, contains a series of unreleased compositions and songs woven into a new form of driving energy. The songs tell the stories of the Adriatic revived through the spirit of the modern musician. The stylistic and compositional maturity reached by the band in recent years is condensed into eleven energetic and innovative tracks mixing wild and crazy grooves, as in A14, Balcaneve, Valzebù, together with a rarefied atmosphere as in Il porto, an intriguing portrait of the ports of the Adriatic or Come fanno i marinai, a tribute to the Italian songwriters revisited in an immersive Greek rebetiko. Musicians: Claudio Prima (accordion, vocals), Emanuele Coluccia (saxes), Redi hasa (cello), Vincenzo Grasso (clarinet, tenor sax), Andrea Perrone (trumpet), Gaetano Carrozzo (trombone), Giuseppe Spedicato (electric bass), Ovido Venturoso (drums, cajon), Luca Tarantino (oud, bouzouki), Roberto Chiga (riqq, tar, darbouka)