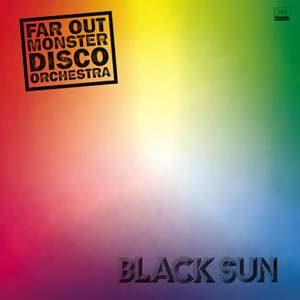 Far Out Monster Disco Orchestra returns with Black Sun, its second full-length album of 100% original, unadulterated disco sophistication, featuring all three original members of pioneering Brazilian jazz-funk trio Azymuth, a full orchestra with arrangements split between Arthur Verocai and Azymuth's late maestro Jose Roberto Bertrami; plus members of the legendary Rio funk group Banda Black Rio. Since its critically acclaimed self-titled debut album in 2014, the FOMDO imprint has released a string of remixes by some all-time greats of dance music, including John Morales, Theo Parrish, Mark Pritchard, Marcellus Pittman, Andres, Dego, Volcov, Kirk Degiorgio and Al Kent. To huge effect in clubs and festivals around the globe, some of the more recent remixes teased the new album material, which for the first time, is presented in its original, soul-heavy incarnation, alongside instrumental versions highlighting the album's stunning arrangements and compositional brilliance. Far from a throw-back – with disco music firmly entrenched in the modern club vernacular - Black Sun is ecstatic dance music at its finest. "THE FAR OUT MONSTER DISCO ORCHESTRA ARE THE ELITE OF BRAZIL'S JAZZ, FUNK AND SAMBA MUSICIANS" - MIXMAG "SINCE 2011, THE ORCHESTRA HAS BEEN BRINGING A CONSISTENT STREAM OF ORIGINAL MODERN DISCO SOUNDS." - BOILER ROOM "FAR OUT RECORDINGS' FAVOURITE BRAZILIAN LUMINARIES AND MANY OF RIO'S FINEST MUSICIANS" - CRACK MAGAZINE