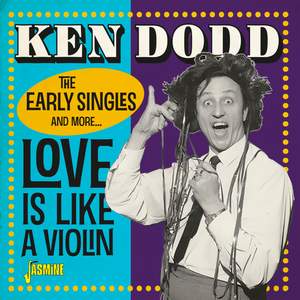 Love Is Like a Violin (The Early Singles and More...)

Nicolas Rimsky Korsakov, Jimmy Kennedy: The Treasure in My Heart

Kermit Goell: Dream That I Love You

Vittorio Mascheroni: Jealous of You

Jacques Larue: Once in Every Lifetime

Richard Rillo Loebel, Arthur Anderson: Just for a While

Kennedy, J: If My Heart Was a Ship (On the Ocean)

Kennedy, J: Come to Me

Cyril Ornadel: More Than Anyone I Know

Sammy Fain, Pierre Norman: You Brought a New Kind of Love to Me

Baker Knight: The Wonder of You

Warren, H: My Heart Tells Me

Warren, H: The more I see you

When British National Treasure Ken Dodd died earlier this year, he left a void in the world of entertainment that will never be filled. A funny man on and off stage for seven decades, Ken's main line of work as a comedic genius was bolstered for most of that time by a sideline as a successful singer, with many major hits.

This Jasmine collection goes back to bring you all of Ken's recordings from 1960 to 1962, including his signature song - and our title track: 'Love Is Like A Violin', several other early chart successes such as 'Pianissimo' and 'Once In Every Lifetime' and the complete contents of Ken's first album, originally released in '62.

Despite always considering himself a comedian first and foremost, Ken sold more singles in the UK in his heyday as a singer than the likes of the Rolling Stones and Bob Dylan, with a total of 19 Top 75 hits - 18 of which made the Top 40 - to prove his staying power among UK record buyers.

Remastered as always from the finest available sources, and with the usual informative sleeve notes thatyou have come to expect from Jasmine, this collection of early Ken successes shows why Doddy's popularity as a singer was so enduring, and why this legendary entertainer's version of 'The Liverpool Sound' was able to co-exist so successfully alongside that of his fellow scousers The Beatles and their ilk.