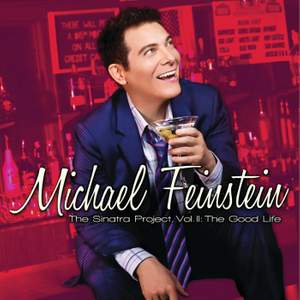 Ray Charles: Hallelujah I Love Her So

Louis Jordan, Billy Austin: Is You Is Or Is You Ain’t My Baby?

Frank Loesser, Stephen Sondheim, Jule Styne: Luck Be A Lady / All I Need Is The Girl

Wilder, A: I'll Be Around

Rodgers, R: The Lady is a Tramp

Ronald Miller, Orlando Murden: For Once In My Life

Anthony Newley, Leslie Bricusse: Once In A Lifetime

'The Sinatra Project, Vol. II: The Good Life' is the follow up to Michael Feinstein's most successful international release, the Grammy nominated 'The Sinatra Project'. This time around he focuses on songs associated with Sinatra and friends. "It's about the people he influenced and who influenced him. The focus is more on the 1960s." says Feinstein. Some of these friends and influences include Dean Martin, Sammy Davis Jr., Peggy Lee, Rosemary Clooney, Ray Charles, Tony Bennett and Antonio Carlos Jobim.

The songs include Sinatra standards such as "Luck Be A Lady" and "The Lady is a Tramp" but also the rare "C'est Comme Ça" and a bossa nova leaning version of "The Way You Look Tonight". As with the original Sinatra Project, Volume II was also masterfully produced and arranged by Bill Elliot. Recorded at the world famous Ocean Way Studios, the album features some of the best musicians that LA has to offer, including over a dozen string and a dozen horn players, plus guitarist Jim Fox, bassist Kirk Smith, drummer Albie Berk and percussionist Bernie Dresel.