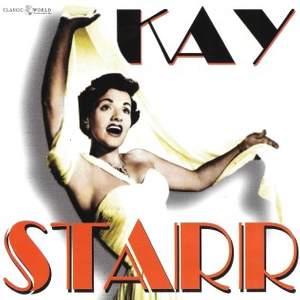 Don't Meddle In My Mood

I've Got My Love To Keep Me Warm

If I Could Be With You (One Hour Tonight)

• 10 song compilation from the amazing Kay Starr including "Honey," "Them There Eyes" and more

A solid jazz singer whose early recordings tended to be forgotten after her ascendancy into the commercial sphere during the mid-'50s, Kay Starr was among the first pop singers to capitalize on the "rock fad" with her 1955 novelty "Rock and Roll Waltz." Her biggest hit came with the era-defining "Wheel of Fortune," a prime slice of '50s adult pop with a suitably brassy reading.

By 1948, Starr made her Your Hit Parade breakthrough with "You Were Only Foolin' (While I Was Falling in Love)." Subsequent hits like "Hoop-Dee-Doo," "Oh, Babe!" and "I'll Never Be Free" (the latter with Tennessee Ernie Ford) framed her in an emerging vein of the popular market that also looked back to traditional country and folk. In 1952, "Wheel of Fortune" became her biggest hit and one of the signature songs of the '50s pop sound.

Starr was successful in every field of music she tried: jazz, pop and country, but her roots were in jazz. Billie Holiday, considered by many the greatest jazz singer of all time, called Starr "the only white woman who could sing the blues."