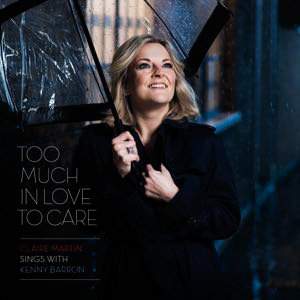 Too Much in Love to Care

1. Too Much In Love To Care

4. Crazy He Calls Me

5. You Turned the Tables On Me

6. How Long Has This Been Going On?

Widely acclaimed as one of the finest recordings of Claire Martin’s career, Too Much in Love to Care (Claire Martin sings with Kenny Barron) was named ‘Best New Album’ at the 2013 British Jazz Awards and ‘One of the Best Albums of 2012’ by Jazz History Online.

Upon its release, Too Much in Love to Care received several five star reviews with Jazz Times describing her vocal talent equal to that of Ella Fitzgerald and Shirley Horn, two of Claire’s idols.

Too Much in Love to Care is a collection of classic romantic songs and beautiful ballads from The Great American Songbook including Gershwin’s Embraceable You and How Long Has This Been Going On? and the title track from Sunset Boulevard.

Too Much in Love to Care was ecorded n ew York and guest stars Kenny Barron, ‘one of the top jazz pianists in the world’ (LA Times) alongside bassist Peter Washington and drummer Kenny Washington.

The chemistry was immediate and many of the tracks were recorded in just one take, remarkable as it was the first time Claire and Kenny had played together.