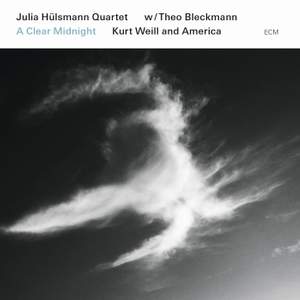 Weill, K: This is new

Pianist Julia Hülsmann and singer Theo Bleckmann, in a first - and long-awaited - collaborative recording, celebrate the "unsung Weill" alongside the master's best-loved works including Mack The Knife, Speak Low and September Song.

Bleckmann's intimate delivery, Hülsmann's sense for the bare-boned ballad, and the discreet arrangements put a well-deserved focus on the lyrics, including the very fine song texts of Langston Hughes, Ogden Nash, Maxwell Anderson, Ira Gershwin and Ann Ronnell - as well as Marc Blitzstein's brilliantly-vivid adaptation of Brecht, which gave Mack The Knife immortality. "The emphasis on slow tempos was made almost intuitively," says Hülsmann. "These wonderful lyrics seem to me to demand that you give them space - and give the listener time to really follow the words".

The project, which also adds Julia's settings of Walt Whitman, with whom Kurt Weill felt an affinity, came together at the instigation of the Kurt Weill Festival in Dessau in 2013. Since then it has gained new life on the road and been fine-tuned in this studio recording made in Oslo in June 2014 with Manfred Eicher as producer. It marks a musical advance for the Hülsmann group at a number of levels, and these recastings of Weill open up new imaginative possibilities for the players.

English trumpeter and flugelhornist Tom Arthurs, who made his debut with Hülsmann on 'In Full View' is fully integrated on 'A Clear Midnight'. Often his trumpet doubles or underpins Bleckmann's singing, giving a new colour to the vocals. As for Theo Bleckmann, this is the sensitive vocalist's first ECM appearance as jazz singer, although he has recorded twice for the label as a member of the Meredith Monk ensemble on 'Mercy' and 'Impermanence'.