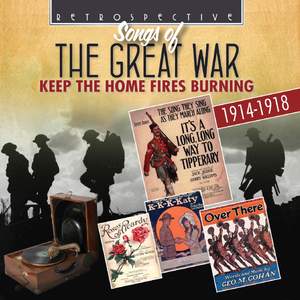 Songs of The Great War

It's a Long Way to Tipperary

You Made Me Love You

When You Wore a Tulip

A Little of What You Fancy Does You Good

The Sunshine of Your Smile

When Irish Eyes Are Smiling

I Didn't Raise My Boy to Be a Soldier

If You Were the Only Girl in the World

For Me and My Gal

Rock-a-Bye Your Baby with a Dixie Melody

They Didn't Believe Me

To mark the centenary of The Great War, Retrospective presents a fascinating musical portrait of the recordings people enjoyed while they “kept the home fires burning” and of the songs written during that cataclysmic period.

There was plenty of jingoism (Over There!), but even more escapism (If You Were The Only Girl In The World), and perhaps the strongest thread was one of pure nostalgia for simple love (Roses Of Picardy). The programme is split into two halves with the first 13 tracks consisting of original recordings made at the time by such as John McCormack (The Sunshine Of Your Smile), Billy Murray (K-K-K-Katy) and Al Jolson (You Made Me Love You), in which the sentiments still shine through the primitive pre-electrical sound. The second half features a baker’s dozen of the most popular songs of 1914-1918 as interpreted by later artists – Paul Robeson (A Perfect Day), Bing Crosby (Too-Ra-Loo-Ra-Loo-Ral) and so on – the revivals often being inspired by World War II.