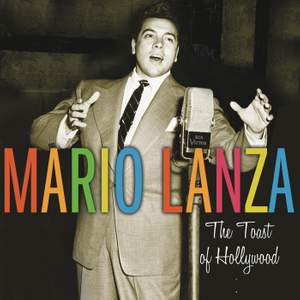 Mario Lanza: The Toast of Hollywood

Irving Aaronson, Paul Francis Webster: The Loveliest Night of the Year (From "The Great Caruso")

Jerome Kern, Herbert Reynolds: They Didn't Believe Me (from "The Girl From Utah")

Irving Kahal, Billy Rose, Dana Suesse: The Night is Young and You're So Beautiful

Henry Ernest Geehl: For You Alone

Brodszky: I'll Never Love You (from "The Toast of New Orleans")

With six previously unreleased gems, the new x30 trk, x2-CD set, The Toast of Hollywood, celebrates world renowned opera and movie star Mario Lanza's extraordinary career. It was from the celebrated soundstages of MGM that the golden voice of Mario Lanza rang out to the world. Opera may have been Lanza's first calling, but Hollywood saw to it that he became an international star. To his credit, Mario made no excuses for his career shift. He believed he was bringing good music – and grand opera in particular – to more people through his movies than he could ever hope to from the classical stage. Luminaries like Luciano Pavarotti, Renée Fleming and tenor Joseph Calleja tended to agree, each of them citing the tremendous impact Lanza's groundbreaking film 'The Great Caruso' had on their respective careers. The full range of Lanza's vocal brilliance is displayed on The Toast of Hollywood, a glittering compilation of popular ballads, opera arias, classic show tunes and beloved standards known the world over.