While Dutch pianist and composer Rembrandt Frerichs has made his name mostly playing jazz, the sounds of classical music have long influenced his work; it would only make sense that eventually this improviser-composer would try his hand at the piano concerto with a more traditionally ‘classical’ ensemble, and that’s just what his latest album is – aptly titled Piano Concertos Nos. 1 & 2. Video-calling us from his home in The Hague, Netherlands, Rembrandt took a break from his busy composing schedule to chat with us about the process of putting together these two concertos and what else he’s got on the horizon for 2022.

When did playing music become an important part of your life?

I think it was around my sixteenth birthday that I really felt like playing the piano and going to the conservatory was something I should consider, so it took me a while compared to some of my contemporaries. The beginning was kind of bumpy; it wasn’t like I’d started with piano lessons at age six and had been playing ever since, and that meant when I joined the conservatory in The Hague I had a lot of catching up to do.

Even so, I came from quite a musical family – we’d have a lot of Bach and other early music playing around the house, and in my teenage years I discovered Herbie Hancock – not so much the ‘Head Hunters’ era, more of that heavy jazz stuff he was doing for Blue Note – this is what formed my musical vocabulary early on. Improvising is the main draw of that type of music for me, and when you slow down improvisation you go to composition – so I don’t find the two to be all that different! For me, composing and improvising are a sort of yin-yang arrangement; on the bandstand you’re making split-second choices with others onstage using the vocabulary you’ve learned, but I do love sitting down to compose and study scores. Being a Dutch guy like myself in Western Europe, I do feel like that early music stuff is part of my DNA, but jazz only deepened my appreciation for it.

How did you come to write these concertos with musicians from the Concertgebouw Orchestra?

The pieces on this new album were commissioned by a couple of musicians from the Royal Concertgebouw Orchestra, who organise concerts at the Muziekgebouw aan ‘t IJ – that’s the more modern 21st Century-oriented music hall in Amsterdam, while the Concertgebouw is more about the 19th Century classical canon. The viola player from these Muziekgebouw concerts gave me this assignment, and it’s a great invitation to be given because depending on your budget you can just pick whoever you want out of the Royal Concertgebouw Orchestra, which is an amazing opportunity as they’re all fantastic players.

Frerichs with the ensemble for Piano Concertos No. 1 & 2

So how much of it was composed beforehand, and how much was improvised?

I think for about 20% of the piano notes one hears on the album, I’m sticking to what l composed, where I thought “it’d be nice if I was playing the same notes as the string players here” or “I could quote a melody here”, and the other roughly 80% of the piano parts is improvised. I’ve worked with classical players before in some crossover-style projects, and from experience it’s nice to let classical musicians play to their strengths, so all of their parts are composed beforehand.

In terms of performance-practice, what we’re doing isn’t so different from what people like Mozart, Beethoven, or Ravel were doing – not that I’m comparing my work to Beethoven! – the process is the same. I’ve read that when composers like Beethoven would take on a new piano concerto assignment, he’d write out all the parts for the other musicians first, then the piano part would either come later or would be improvised during the performance – the way in which we play these piano concertos is very similar. I do like to tease the classical players a little though, to get them to make a few more decisions themselves on stage – but not to the extent where I’m asking them to be jazz players, because then I would be playing with jazz people, you know?

How did you find this process differed from your more jazz-focussed works?

Well, for these musicians I knew in advance who they were – I knew they were some of the best musicians one could be asked to compose for in the Netherlands, but my past experiences have generally been in smaller lineups with fellow improvising musicians. For past albums I could afford to show up with more sketches than with these concertos – compare the piece ‘A Wind Invisible Sweeps Us Through the World’ which is on both this new album and my previous trio recording; it’s the same melody but a bit more loose in the trio version. As a composer, the process was hugely different, because I knew that composing for the Concertgebouw guys was an invitation to ‘work it out’ much more, because they can play whatever you give them. I think this recent album of mine stands out as one of my more thorough CDs; I put much more detail into the composition of the pieces compared to my previous albums.

Have you had a chance to play this material live at all? How has it been received?

Yes, and it’s been wonderful. I can already hear when I compare it to the recording how much more we trust each other, and how much more magic happens when we play together on-stage. For instance, when we played at the Muziekgebouw last month, there were some other performances on the program that included some Gershwin. I felt like quoting ‘Embraceable You’ in the cadenza for our performance – which I hadn’t told the musicians – and it went over really well; every night is different and we keep surprising each other hearing the music in another context. Every time I play with these classical musicians I feel more trust and confidence to make these kinds of variations and get away from just reading the notes on the page. I only wish people would come to more than one concert, then they’d see how the performance changes between each night!

Have you faced any challenges at all when performing these concertos?

What has been interesting is hearing the classical musicians say they have to take some time to ‘understand the musical language’ of the pieces. On paper I knew some of the parts were quite difficult – some not so much – but sometimes when we’ve not played together for some time, they need to go over it to properly tap into this language, apparently. Maybe it’s more about incubation time, and by next year when we’ve played it another twenty times through it won’t matter.

So besides touring these two new concertos, have you got anything else lined up for this year?

This year is pretty wild for me, actually; with this post-COVID situation so many things which were originally meant to take place in 2020 and 2021 have been pushed forward to now, so I’m quite busy! I’ve booked a couple of days this week to finish a composition I’ve started for the Calefax reed quintet, and there’s also an assignment for a third piano concerto by the Residentie Orkest here in The Hague which is quite far away but I’m making the first sketches for that. I also just came back yesterday from a very physical artist-in-residency in the north of the country with a larger group – a chamber group of ten musicians – working on a new piece of mine. So this piano concerto album release is kind of a starting point for all this, beginning to work with bigger ensembles, so that’s been very fulfilling. I had 91 concerts cancelled in the Corona period, but after two years of nothing this contrast is so huge! 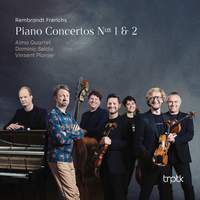