Recording of the Week,  Binker and Moses - Escape the Flames 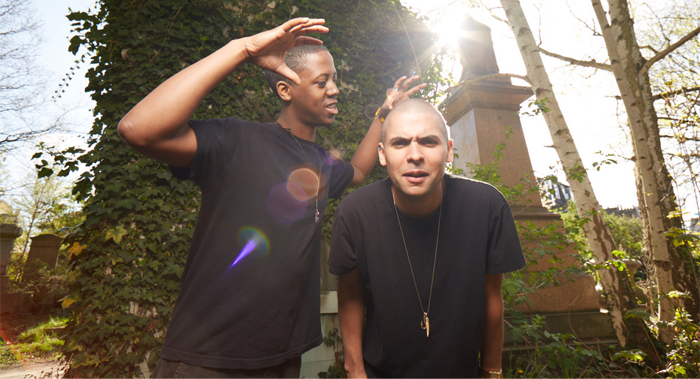 Saxophonist Binker Golding and drummer Moses Boyd have been collaborating as ‘Binker and Moses’ for the best part of six years now, as two of the brightest stars of the already incredibly fruitful London jazz scene. For both Golding and Boyd, ‘Binker and Moses’ was one of the pair’s earliest projects, and have both since released their own solo works, as well as Boyd enjoying a resident host spot on BBC Radio 1 Xtra. Boyd can also be heard on a handful of great recent jazz recordings from UK artists such as Sons of Kemet, Theon Cross and Tori Handsley. Beginning as many young jazzers do by taking on as many sideman gigs as possible, their raw debut as a duo, 2015’s Dem Ones, was born out of the pair’s improvisations during soundchecks while on the road with singer-songwriter Zara McFarlane, where the pair met in her backing band. What began as a set of recorded jams grew into a fully-fledged project, with their debut album Journey to the Mountain of Forever featuring a handful of fellow British jazzers both young and old; Journey featured guest spots from younger players like aforementioned harpist Tori Handsley to free improv veteran and saxophonist Evan Parker. Escape the Flames, however, bears more similarities to Dem Ones in its austerity, only featuring the eponymous duo themselves on the recording.

Escape the Flames itself is a live show, recorded at the duo’s release party for their debut album, on a July evening in 2017 at the Total Refreshment Centre in London. Those familiar with that debut release will note that Escape the Flames features the tracks from the first half of the album; the set itself is a reinterpretation of sorts of this first half of Journey to the Mountain of Forever, and in the spirit of the duo’s self-described ‘semi-free jazz’ it’s both highly rhythmic and wildly improvisational. The opening track ‘The Departure’, for instance, is stretched from its original seven-minute duration to a seventeen-minute jam, and indeed most of the tracks enjoy an extra handful of minutes on top of their original runtimes, many of them over ten minutes total. Within this space, there’s plenty of room for the duo to go off on their own micro-odysseys. 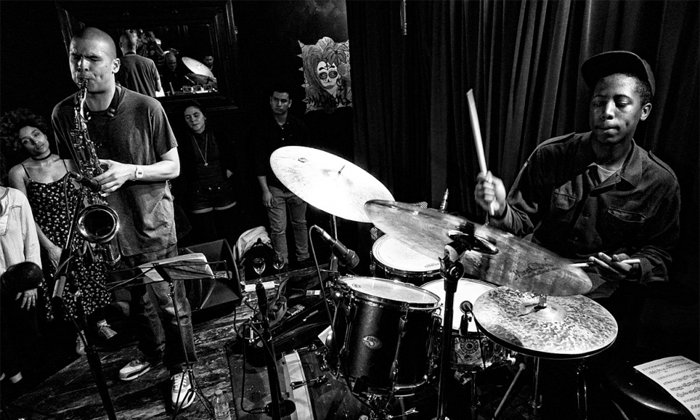 Boyd holds down the groove, grounding the duo even as the improvisations start to open up more; where a lesser drummer might get lost in their own racket, Boyd remains locked in tight, and in turn frees up Golding to take the crowd down his own melodic tangents. Golding’s sax shrieks, much to the delight of the audience, and he sounds like he’s hardly drawing a breath throughout, either playing punchy melodic lines or seamless, flowing solos. While it’s easy to get caught up in the chaos, Binker and Moses can take us far away from any grounded rhythm or beat before suddenly reminding us of where we are, transitioning back into familiar melodic territory. Escape the Flames isn’t just wild free soloing, though; the second track ‘Intoxication From the Jahvmonishi Leaves’ features a steady groove and bluesy sax riff, and the similarly melodic ‘Fete By the River’ is a danceable tune that doesn’t venture too far from the core of the song. The closer ‘Leaving the Now Behind’ is about as balladic as the pair get, leaving the audience with a moment of calm after the storm, capping the recording off with a quiet farewell and rapturous applause. In the spirit of classic jazz recordings, the duo seem to revel in this opportunity to improvise - under the albeit fairly loose structure of their debut album’s tunes - and even those familiar with the original recording can listen with fresh ears. In a time where the feeling of a live show feels like a distant memory, it’s been incredibly enjoyable - if a little bittersweet - to hear a glimpse of that raw energy again. 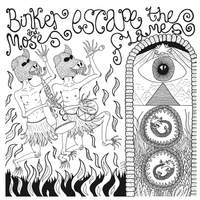