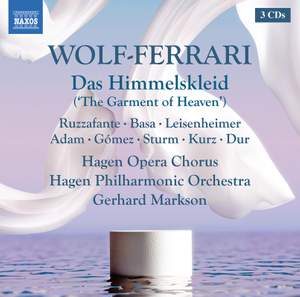 Wolf-Ferrari: The Garment of Heaven, Act I

Ermanno Wolf-Ferrari is best known for his comic operas. With this reputation established, the appearance of Das Himmelskleid in 1927, with its ‘symbolical twilight world… that rises musically to religious greatness and a world of dreams’ was a surprise for critics of the day. The narrative is a parable of a young princess who is born with the ‘Garment of Heaven’, but she forgets this true gift in her greedy pursuit of wealth and power. Das Himmelskleid is perhaps the most profoundly mature of Wolf-Ferrari’s operas, with an amazing sensitivity and feeling for sound and colour that were never bettered. This 3-disc set from the mid-1990s is a re-release from our Marco Polo label (8.223261-63). This is a recording that has lost none of its sparkle over the years, and it remains the only commercially available recording of this significant work. With its striking combination of Wagnerian heft and Italianate lightness this work is overdue for a return to the mainstream.