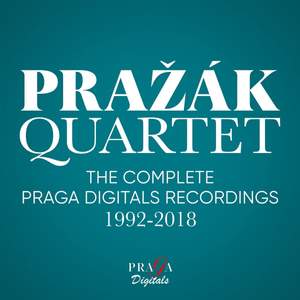 Dvořák: Cypresses for string quartet, B152

The Pražák Quartet, one of the most eminent modern quartets and a major heir to the Czech tradition, is celebrating its 50th Anniversary in 2022.

On this occasion, Praga Digitals present a special edition anniversary box set of 50 CDs featuring all the recordings made between 1992 and 2018 under the guidance of the late Pierre Émile Barbier, founder of the label.

This exceptional box set traces the ensemble’s journey in its historic formation, comprising Václav Remeš (followed by Pavel Hůla from 2010 onwards) on first violin, Vlastimil Holek on second, Josef Klusoň on viola, and Michal Kaňka on cello - prior to its near-complete re-configuration in 2020.

At the heart of the programme are the complete quartets of Beethoven and the very first complete recording of the works of the Second Viennese School (Schoenberg, Berg, Webern), Czech repertoire (Dvořák, Smetana, Janáček, Martinů) and Viennese Classicism (Haydn, Mozart), as well as German Romanticism (Schubert, Brahms, Schumann, Mendelssohn), the Russians (Tchaikovsky, Prokofiev, Shostakovich), and also Strauss, Mahler, Zemlinsky, Schulhoff.

The collaboration between the Pražák Quartet and Praga Digitals marks one of the most important epic ventures of modern recording, reminiscent of the golden age of the Amadeus, Juilliard or Alban Berg Quartets - a priceless legacy as much in terms of its scope as its artistry and sound quality, as well as its multiple awards.  50 CDs for 50 years. Happy birthday and long live the Pražáks!