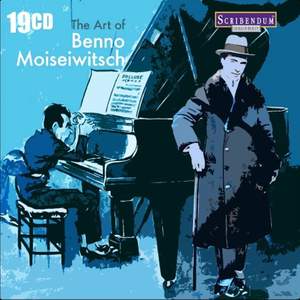 New, The Art of Benno Moiseiwitsch

Mendelssohn: Song without Words, Op. 19b No. 3 in A major 'Hunting Song'

Rachmaninov: Scherzo from A Midsummer Night's Dream (after Mendelssohn)

Born in Odessa (Ukraine), Moiseiwitsch was a pianist who transcends categorisation. He is as much valued and revered today, as he ever was An aristocrat and a gentleman, both as an artist and a person, his interpretations are characterised by poetic and lyrical phrasing, as well as natural, unrestrained rhythmic expression and virtuosity Rachmaninov himself declared that Moiseiwitsch played some of his works, including the second piano concerto, better than he did himself and called him his ‘spiritual heir’ Many pianists choose to express emotion through showmanship. Benno Moiseiwitsch by contrast, was an artist of unpretentious certainty; he kept a poker-faced appearance whilst bringing warmth, elegance, beauty and depth of emotion to his playing