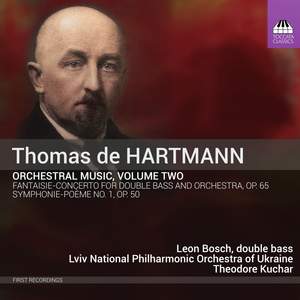 The music of the Ukrainian-born Thomas de Hartmann (1884–1956) is only now beginning to be rediscovered, almost seven decades after his death. The two works receiving their first recordings here reveal a major late-Romantic voice, downstream from Tchaikovsky, a student of Arensky and Taneyev, contemporary of Rachmaninov, and alert to the discoveries of Stravinsky and Prokofiev. The Symphonie-Poème No. 1 – a musical cousin of Rachmaninov’s Second Symphony – occupies a vast canvas and requires a correspondingly huge orchestra, generating a monumental sense of scale from essentially balletic material. The lighter Fantaisie-Concerto for double bass and orchestra moves from tangy dissonance via a tuneful slow movement to a perky, folk-inspired finale.

Theodore Kuchar conducts both works committedly and the Lviv orchestra’s playing is powerful and sonorous. British-South African double bassist Leon Bosch plays at a high level and can make his instrument sing enchantingly.