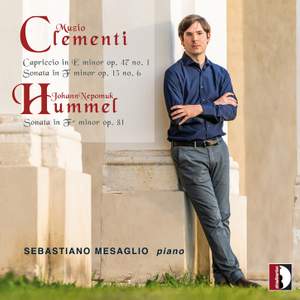 Still today, an area of shadow, sorely in need of illumination, continues to surround the piano output of various composers living between the end of the 18th and start of the 19th centuries, indisputable protagonists at the key-board and creators of new aesthetics in the period in which they lived, forgotten with their death and rarely con-sidered by posterity if not within limited and unjust boundaries. They are considered almost unapproachable, even negligible, because of a critical vision incapable of seeing, broadly speaking, beyond the established triads: Haydn, Mozart and Beethoven for Classicism, Chopin, Schumann and Liszt for early Romanticism. Thus, figures such as Cramer, Field, Czerny and Moscheles, who lived between the two centuries, and Hiller, Thal-berg and Henselt, born in the 19th century, are eternally relegated to second place. Above all, however, justice is continued to be denied to Muzio Clementi (1752-1832) and Johann Nepomuk Hummel (1778-1837), who had a direct and not insignificant relationship with the above-mentioned trinities, es-pecially the former, steadfastly holding their own and reciprocating their esteem, apart from certain disagreements seen in some of their letters, and teachers in turn of some of the misunderstood figures mentioned above. In this admirable recording, the pianist Sebastiano Mesaglio, sensitive and zealous re-evaluator of what the history of the piano has passed down to us, offers through an aptly chosen selection of sonatas the chance to gain a clear understanding of what Clementi and Hummel’s contemporaries thought of them, quite rightly, and what we in turn should think.