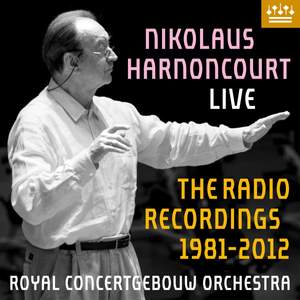 All recordings previously unreleased as audio

Curated by the artistic committee of the orchestra

Most recordings specially cleared for the box set

Being one of the pioneers in the field of the authentic music practice, Harnoncourt not only brought to the orchestra invaluable knowledge on how to play music from the Baroque and Classical eras (on modern instruments), but his musical philosophy was and still is equally convincing in (late) Romantic music.

Right from the first rehearsals for Bach’s St. John Passion in 1975 until the 2013 final concerts in which he conducted Bruckner’s Fifth Symphony, Nikolaus Harnoncourt’s 276 performances with the Concertgebouw Orchestra have not only been unforgettable and illuminating concerts for the audience, but they have proven to be a lasting inspiration for the orchestra.