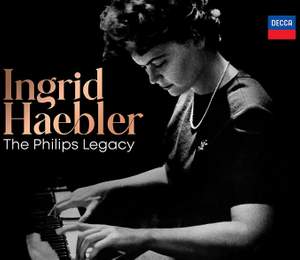 Mozart: Sonata for Piano duet in B flat major, K358

Mozart: Andante and Variations in G for Piano Duet, K501

"Terms such as “fastidious”, “intimate” and “quietly nuanced” have long been applied to the immensely respected Ingrid Haebler’s interpretations. She was a “purist” in the best sense of the word and has often said that she always sought to convey the essence of the music according to the language and style of the composer’s time. Her goal is that the listener should understand the structure and the message of the work, without anything to disrupt it. She has always been admired for the grace and shapeliness of her phrasing, her pellucid cantabile touch, her crystalline articulation, and the warmth, sensitivity, and quietly nuanced expressivity of her interpretations. With an imposing discography, Haebler was regarded by many as Philips’ “house pianist”. Decca now proudly presents her Complete Philips Recordings on 58CDs in tribute to this rare and special artist.