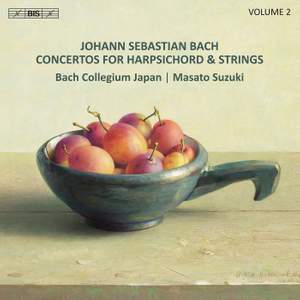 "The concertos by Johann Sebastian Bach for solo harpsichord and strings are some of the earliest, if not the very first, keyboard concertos. In all likelihood Bach wrote them for his own use (or that of his talented sons) –probably to be performed with Leipzig’s Collegium Musicum. The concertos’ fresh and exuberant character reflects how much Bach enjoyed the opportunity to engage with his fellow musicians, a quality that also came across on Masato Suzuki’s first installment of Bach's harpsichord concertos together with his colleagues in Bach Collegium Japan: ‘sparkling performances...[Suzuki’s] remarkable virtuosity is beautifully projected by BIS’s excellent SACD recording’ (MusicWeb-International). Despite how idiomatic they may sound, many of Bach’s harpsichord concertos are almost certainly transcriptions of earlier works written for other instruments. Of the works presented on this second volume, BWV 1054 and BWV 1058 are adaptations of violin concertos composed while the composer was living in Cöthen. The model for BWV 1055 has been lost but it is believed to be a concerto for oboe or viola d’amore. BWV 1057, finally, is an adaptation of the well-known Brandenburg Concerto No. 4, transposed down one step but retaining the original’s two recorders. As examples of musical recycling, these works display Bach’s uncanny ability to re-use successful music ideas and give them a new meaning and significance."

Masato Suzuki proves an ideal keyboard soloist, balancing moments of zestful virtuosity with some elegant inequality in the passagework. Willem Kroesbergen’s copy of a contemporary Couchet harpsichord on which he plays is characterful with a pleasing range of timbre; and throughout, in these well-recorded performances, it blends attractively with the other instruments.

Generally, these are steady and conventional readings...There is great clarity and air, however, as well as a pleasing sense of a harpsichordist treating them as elegant accompanied harpsichord pieces, that puts me in mind of the Leonhardt recordings of the early 1970s.