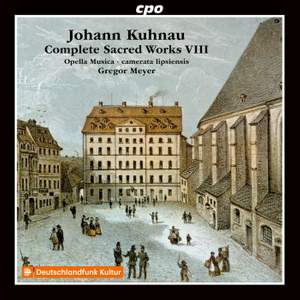 Vol 8 is an arcane miscellany...Sure-footed performances are amiable and colourful. — Gramophone Magazine, September 2022

"With the eighth CD of our complete recording of Kuhnau's vocal works, to be released in honor of the 300th anniversary of Johann Kuhnau's death in June 2022, this ambitious project now reaches its conclusion. This production delivers a range of musical genres that could hardly be wider. Everything is represented, from simple secular arias to sacred concertos still clearly in the 17th century tradition and elaborate cantata-like structures such as those presented by the mature Thomaskantor Kuhnau. The three arias represent a discovery of a special kind. Passed down in an anonymous score in the historical music collection of the Princely School of Grimma, they have recently been identified by René Bialik as autographs of Johann Kuhnau. The arias of three or four stanzas each with partly choral refrain point both textually and musically to a representative occasion of origin, which was apparently celebrated outdoors. Unique in its own way is also the Latin chamber cantata ""Spirate clementes, o Zephyri amici."" Kuhnau's setting has a distinctly chant-like and flowing character rarely found elsewhere in his oeuvre."

Vol 8 is an arcane miscellany...Sure-footed performances are amiable and colourful.