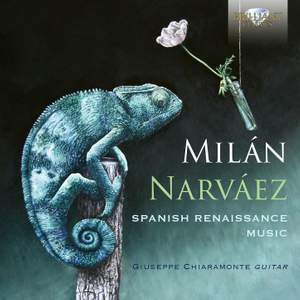 Two 16th-century masters of the Spanish vihuela, speaking afresh to the 21st century through the modern guitar of Giuseppe Chiaramonte.

In 2020, Giuseppe Chiaramonte starred in a SKY TV documentary about the solo-guitar fantasias of the 19th-century Hungarian composer Johann Kaspar Mertz. These pieces formed the subject of his debut in Brilliant Classics (95722), for an album which won acclaim in the specialist-guitar press for the warmth of Chiaramonte’s sound, the palette of his tonal colours and his adventurousness in reviving the music of a composer deservedly once known as the ‘Liszt of the guitar’.

Mertz’s 16th-century equivalent was undoubtedly Luys Milán (1500-1560), who referred to himself without false modesty as ‘El Maestro’ and a second Orpheus. Published under his name in 1536, El maestro is the first printed collection of music for the vihuela; the earliest Spanish collection of solo instrumental music and accompanied songs; and the first printed example of guitar tablature in Spain.

Milán was a guitar (vihuela/lute) storyteller par excellence, and they call for performers of commensurate skill. His fantasias evolve from the very nature of the instrument for which he composes, being composed at the instrument as elaborate improvisations and then later committed to paper.

The six pavans in Milán’s collection resemble the dances of the same name from further north in Europe, though less afflicted by melancholy. They illuminate in turn the more intricate polyphony of the fantasias and tientos composed by a shorter-lived contemporary, Luys de Narváez, who died in 1550, barely into his mid-20s. Thus deprived of further experience, Narváez was still writing in a more restrained idiom than Milán, though no less affecting in its way.

It was largely thanks to these two composers that the vihuela attained such popularity in 16th-century Spain, and modern audiences may appreciate the poetry of their music once more thanks to the inspired advocacy of Giuseppe Chiaramonte, who introduces the life and work of both composers in a detailed booklet essay accompanying the album.

‘The best performances of Mertz’s solo pieces that I have heard… revelling more wholeheartedly in the virtuosity of the music. The instrument played by Giuseppe Chiaramonte is a joy in itself.’ – MusicWeb International