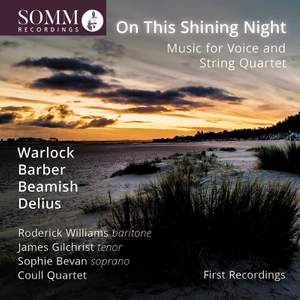 Offer,On This Shining Night: Music For Voice and String Quartet

By far the most interesting interplay between voice and string quartet in this new recital is in Sally Beamish’s five Tree Carols, of which this is the first recording...All told, a cleverly... — BBC Music Magazine, September 2022, 4 out of 5 stars (Performance) / 5 out of 5 stars (Recording) More…

Warlock: The Fairest May

Warlock: My lady is a pretty one

No. 3, Sure on This Shining Night (Arr. R. William for Voice & Strings)

No. 2, The Trees Are Troubled

No. 5, Bushes and Briars

No. 1, Twilight Fancies [Sung in English]

No. 2, Sweet Venevil [Sung in English]

SOMM Recordings is delighted to announce a thrilling first collaboration between long-time SOMM stablemates, baritone Roderick Williams and the Coull Quartet, joined by tenor James Gilchrist and soprano Sophie Bevan. With six first recordings, On This Shining Night is a ravishing recital focusing revealingly on a 20th-century phenomenon: works for voice and string quartet. It takes its title from a James Agate setting by Samuel Barber (whose masterly Dover Beach is also heard), here in a sublime arrangementby Roderick Williams. Williams also provides arrangements of Barbers Sleep Now and three Frederick Delius pieces from his Seven Songs from the Norwegian: the evocative Twilight Fancies, vivacious Young Venevil and exotic I-Brasil. They serve, as Robert Matthew-Walkers erudite booklet notes observe, as companions to 11 songs by Deliuss close friend and associate, Peter Warlock, including the gentle intimacy of Corpus Christi, the mini-cantata Sorrows Lullaby, and unique free-recitative of My gostly vader.Composed for Williams and the Coull Quartet, Sally Beamishs five-part Tree Carols offer striking, variegated settings of poems by Fiona Sampson in their premiere recording. Roderick Williams SOMM catalogue include the acclaimed three-volume Twelve Sets of English Lyrics by Hubert Parry (SOMMCD 257, 270, 272), Sally Beamishs Four Songs from Hafez (Birdsong, SOMMCD 0633), and theclassic English song cycles A Shropshire Lad and Maud (SOMMCD 0615), which MusicWeb International declared a game changer in terms of our appreciation of Arthur Somervells songs. The Coull Quartet has recorded a wide repertoire for SOMM. Theirrecording of Nicholas Maw and Benjamin Britten quartets (SOMMCD 065) was a Gramophone Editors Choice and a BBC Music Magazine Benchmark Recording. Gramophone declared their recent SOMM release with Cllia Iruzun, Treasures from the New World, featuring piano quintets by Amy Beach and Henrique Oswald (SOMMCD 0609), a delight.

By far the most interesting interplay between voice and string quartet in this new recital is in Sally Beamish’s five Tree Carols, of which this is the first recording...All told, a cleverly programmed and edifying recital.

There are gems galore in this delightful sequence...Suffice to say, Williams sings with consummate agility, intelligence and disarming beauty of timbre, and his partnership with the Coull Quartet is a most nourishing one.

This is a very fine CD... Roderick Williams has the lion’s share of the singing and he is on top form. But the contributions of Sophie Bevan and James Gilchrist in the Warlock group are equally distinguished. The Coull Quartet plays splendidly throughout.

On This Shining Night pinpoints dualities in each of them and yields from both soloists and the Coull accounts of mellifluousness and exceptional vitality.