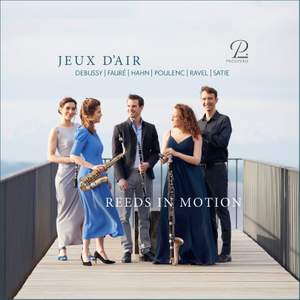 III. Sérénade For The Doll

Pièces Froides, No. I

The woodwind quintet Reeds in Motion is a special ensemble in many aspects. The exclusive instrumentation alone -oboe, saxophone, clarinet, bass clarinet and bassoon - is not commonplace. They are all instruments that are made to sound with a single or double reed and thus form an extremely homogeneous and changeable body of sound.

The five musicians, who met during their studies at the Basel Music Academy and came together in 2017 with Reeds in Motion, are all sought-after soloists, chamber and orchestral musicians, thus enriching the ensemble each in its uniqueness.

Reeds in Motion has performed at festivals such as Lauvaux Classique and Klangbasel festivals, as well as in Paris for a live broadcast on France Musique and in Armenia at the International Wind Festival 2019 in Yerevan.