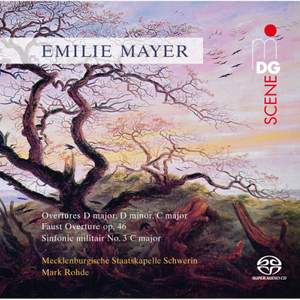 Emilie Mayer's contemporaries in the mid-19th century were arguably unaware of the outstanding quality of her compositions because they only saw the woman instead of the composer.

You might think you missed something when you listen to the brand new Super Audio CD of the Mecklenburgische Staatskapelle: with chief conductor Mark Rohde on the podium.

The musicians from Schwerin succeed in a salute of honour that could not be more attractive.

Financially independent at an early age, Emilie Mayer was able to devote herself entirely to her passion for composing. Her misfortune: instead of salon music, which was at best acceptable to women, she ventured into the grand form.

Eight symphonies alone came from her pen, as well as several overtures, of which only the "Faust" overture appeared in print during her lifetime.

In her earlier works, the composer orientates herself on classical models; the overtures No. 2 and 3 hint at memories of Haydn and Mozart. But she is also no stranger to the romantic, and the D minor overture unfolds a world of sound reminiscent of Bruckner.

The most extensive work of this commendable new publication is the "Sinfonie militair", whose genesis can perhaps be traced back to the influence of Mayer's teacher, the Prussian military musician Wieprecht.

Recorded in MDG's pioneering 2+2+2 SACD Surround Sound, this is a must for all collectors.

Emilie Mayer is certainly worth discovering and exploring.