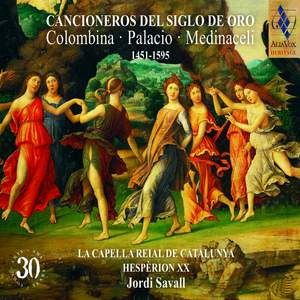 Deluxe remastering of three albums that include the three most famous songbooks of the Golden Age (1451-1595). The Sevillian Cancionero de la Colombina and Cancionero Musical de Medinaceli are samples of a musical humanism with a distinctly Hispanic stamp, in which the cultured and the popular come together. The Castilian Cancionero de Palacio is the most valuable and representative jewel of the repertoire performed in the itinerant Courts of the Catholic Kings, including songs, Christmas carols, ballads and ‘extravagances’ by authors such as Encina, Millán, Escobar, Anchieta, and Peñalosa. La Capella Reial de Catalunya, Hespèrion XX and Jordi Savall made them known to the world through these famous recordings made between 1991 and 1992.