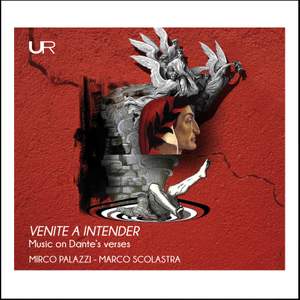 The compositions contained on this CD allow us to become familiar with the most significant and compelling chamber music scores composed on texts by Dante between the 19th and the 20th centuries, performed by the bass Mairco Palazzi and pianist Marco Scolastra.

The primary literary source is the Divine Comedy, especially the Inferno with its characters whose worldly events were horribly and romantically over-whelming. The other work whose verses have been put to music is Vita nova, a middle way between poetry and prose, that is the emotional obsession of an adolescent for the stylised figure of a woman his own age.