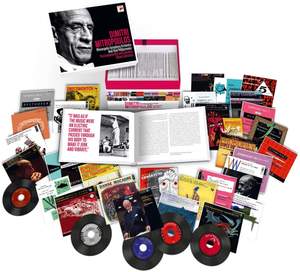 Sony Classical is proud to announce another most significant historic release of recent years: a 69-CD box set containing the recorded legacy of Dimitri Mitropoulos (1896–1960), who ranks by general consensus among the 20th century’s most brilliant conductors. Many of these legendary performances on RCA Red Seal and Columbia Masterworks have never before been transferred from their original analogue masters.

As this massive new box set definitively demonstrates, Mitropoulos faithfully documented his eclectically wide-ranging repertoire on disc in Minneapolis and New York, even recording some favourite works in both cities. To cite a few highlights from the Minneapolis Symphony years: there is the first-ever recording of Mahler’s First Symphony (1940), which “can still be counted among the finest the work has received” (Gramophone); Tchaikovsky’s Symphonies nos. 4 (1940) and 2 (1946) as well as his First Piano Concerto with Arthur Rubinstein (1946) – “The soloist is in rare form, and this is an example of the grand manner in operation” (High Fidelity).

Other symphonies for which Mitropoulos showed his special affinity in Minneapolis include the Borodin Second (1941; MusicWeb International: “The best performance of the Borodin symphony I’ve ever heard”), Schumann’s Second (1940) and “Rhenish” (1947), the Prokofiev “Classical” (1940) and Franck D minor (1940) – “Mitropoulos infuses his reading with unbearable intensity” (Classical Notes).

With the New York Philharmonic, Mitropoulos conducts the epoch-making first recording of Berg’s Wozzeck (1951) with Mack Harrell and Eileen Farrell – “It is difficult to conceive any other conductor having an equivalent grasp of the score; and Mitropoulos infused his knowledge and vitality into his soloists” (Gramophone); Schoenberg’s Verklärte Nacht, Erwartung with soprano Dorothy Dow (1951) and the first recording of his Violin Concerto, with Louis Krasner (1952); Krenek’s Symphonic Elegy (1951); and memorable Berlioz including an “almost hallucinatory” (Classical Net) Symphonie fantastique (1957) and excerpts from Roméo et Juliette (1952).

Other New York recordings with a soloist include David Oistrakh’s “unmissable … spellbinding … not least because of the conducting” (Gramophone) first recording of the Shostakovich Violin Concerto no.1 (1956); pianist Robert Casadesus in the Beethoven “Emperor” (1955), with “accompaniments as dynamic and exciting as the soloist’s playing” (Classics Today), and Falla’s Nights in the Gardens of Spain (1956–57) – “Remarkable … Listen to the mystery and menace that he and Mitropoulos find in the first movement’s second half, or to the huge passion they bring to its climax” (Classics Today); the Mendelssohn and Tchaikovsky (1954) and Prokofiev’s Second Violin Concerto (1952) with Zino Francescatti and the Prokofiev First Concerto with Isaac Stern (1956).

Major American works from New York include the recording premiere of Roger Sessions’s Second Symphony (1950) – “one of the most important symphonic works ever produced in the United States” (Gramophone).