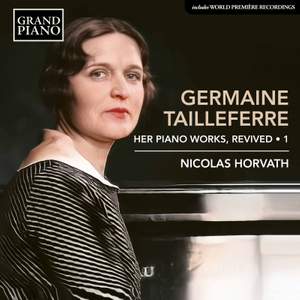 The Monaco-born Horvath’s versatility (check out his discography) lends itself to the chameleon Tailleferre: she switches from neoclassical to radical, tonal to bitonal, rhythmic and familiar... — The Guardian, 9th April 2022 More…

Tailleferre: Pastorale in A Flat

Germaine Tailleferre is best known for being the only female member of the French group of composers known as Les Six, and her stylish combination of neo-Classicism with a ready wit and energy can be compared to Poulenc and Milhaud. From the captivating Romance written while still a student, to her sparkling music for the 1937 Paris international exhibition, all of these pieces show Tailleferre as being very much at the heart of the contemporary French musical scene. This recording, described by the composer’s granddaughter as being ‘as though Tailleferre herself was perfoming these works’, is the first of three volumes presenting the complete piano music played by Nicolas Horvath.

The Monaco-born Horvath’s versatility (check out his discography) lends itself to the chameleon Tailleferre: she switches from neoclassical to radical, tonal to bitonal, rhythmic and familiar to irregular and dissonant. Horvath is a great advocate.