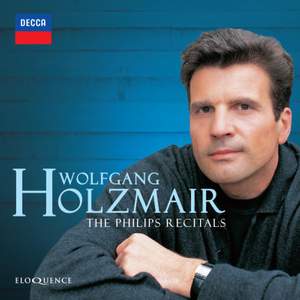 Beethoven: When far from the home

From Haydn to Eisler: the collected Philips recordings of WOLFGANG HOLZMAIR, a supreme art-song interpreter, including many long-deleted albums. Wolfgang Holzmair has long been recognised as one of todays most accomplished and intelligent Lieder singers. He brings a refinement and subtlety to his performances worthy of the great German Lieder baritones, but it is the silky elegance of his voice that has always seduced listeners and critics: the golden, tenorial top as well as his rich, soulful lower register.

In celebration of his 70th birthday, this set brings together his complete Philips recitals for the first time, as well as his 1995 recording for Koch of the Hollywood Songbook by Hanns Eisler. The box is ordered by musical chronology, beginning with the folksong-like simplicity of Haydns solo-vocal idiom, a quartet of exquisite Mozart Lieder and the Beethoven cycle An die ferne Geliebte that became the keystone for the Romantic artsong tradition.

Here and in the major cycles by Schubert and Schumann, Holzmair is partnered by Imogen Cooper, whose sensitivity to every turn of phrase and harmony places her in the pantheon of great Lieder pianists. Their partnership ranged beyond the acknowledged masterpieces of the tradition to include an imaginative recital of Eichendorff settings by Schumann, Hugo Wolf and Aribert Reimann, as well as a selection of Lieder by both Robert and Clara Schumann, including two songs Rose, Meer und Sonner and Aus den Ostlichen Rosen which were not included on the original Philips album.

For his Philips albums of repertoire outside the central Austro-German Romantic tradition, Holzmair found sympathetic partners in Grard Wyss and Maria Beloussova. These include two French albums and a pair of retrospectively tinted cycles by Ernst Krenek. In all cases, critics cherished Holzmairs conversational confidence of phrasing, and a poetic understanding capable of creating mounting subtle effects that can unify the disparate elements of a song cycle around a subtle evolution of mood.

This original covers set concludes with the German Requiem of Brahms, recorded in San Francisco with Herbert Blomstedt and widely praised as among the most lyrically affecting of modern versions. The booklet includes an appreciation of Holzmairs art by James Jolly and a memoir of their working partnership by Imogen Cooper.

Its the beauty of the voice itself that first grips the listener: a light baritone of moderate size and range, used with great skill and refinement. Within a relatively limited dynamic scale he displays a sensitive pointing of words and abundant coloristic variety. Stereo Review, September 1995 (Schwanengesang)

His Dichterliebe strikes me as among the best ever recorded. Clearly Holzmair has a special affinity for Schumann. The very sound of his voice, his lightness of vocal touch, and what is clearly a deeply felt collaboration with Imogen Cooper all make for music-making of a surpassing naturalness, with not a wrong step along the way." Fanfare, January 1996 (Schumann)

This exquisite recording of the principal song cycles of Robert Schumann, based upon poems of Heinrich Heine, is among [Holzmairs] best to date captured with intimacy and warmth by the Philips engineers. Stereo Review, January 1996

Holzmairs tone has a tenor-like lightness and he favours an undemonstrative manner yet he seems to lose nothing of the chilling, numb bleakness of either music or text, and lmogen Cooper shows probing psychological acuity in her handling of the piano part Highly recommended." Irish Times, June 1996 (Winterreise)

A most beautiful legato The beauty of Holzmairs singing is in a different category altogether The work of the Trio Fontenay is a delight in itself." Gramophone, August 1998 (Beethoven)

A program that is not only coherent but imaginative Beethovens invention of the song cycle remains a masterpiece, with Holzmair doing it justice in his own way. Cooper is once again the ideal partner. Fanfare, September 2000 (Haydn, Mozart, Beethoven)

As ever, [Holzmair and Cooper] unified in musical thought, bring alert minds and alert musicality to everything from the relatively simple manner of Mendelssohn to the etiolated yet complex world of Reimann Clear, keenly balanced recording. Gramophone, February 2003 (Eichendorff Lieder)

The program is traversed with great vocal skill and incisive word painting by Holzmair, and all the requisite keyboard colors and dramatic shifts are illuminated by Imogen Cooper A winner on all counts. Fanfare, July 2003 (Eichendorff Lieder)