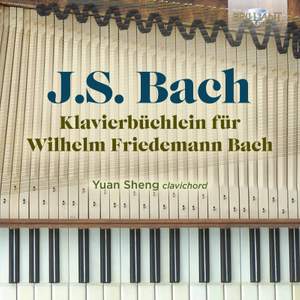 With almost 70 separate pieces across the 130 minutes of this generous collection, Yuan Sheng surveys a sometimes overlooked aspect of Bach’s industry and genius, as both teacher and family man. This side of him is generally associated with the two notebooks begun for and subsequently compiled by his wife Anna Magdalena, but both of those volumes include several pieces not by Bach himself.

Johann Sebastian regarded Wilhelm Friedemann as the most naturally gifted of his musical children, and some idea of the child’s gifts, and the rigour of his training, may be gleaned from the fact that the notebook dates from 1720, when WF was just ten years of age. The collection follows his standard teaching practice of composing pieces which address particular technical aims – finger exercises, trills, clarity of touch – so that the music itself would teach the student and technique could be derived from the music rather than the other way around.

Much of the material from this Clavierbüchlein became absorbed into the better known collection of two-part Inventions and three-part Sinfonias which JS compiled three years later, but the original sequence is more extensive and more diverse. Almost uniquely on record, Yuan Sheng has recorded and presented the two collections together, affording an invaluable insight into Bach’s creative mind as a teacher and as refiner and reviser of his own music.

Yuan Sheng studied with the ‘high priestess’ of Bach on the piano, Rosalyn Tureck, but he has long made a name for himself as a harpsichordist, pianist and Bach interpreter of the highest pedigree, as well as a teacher of historically informed performance practice in his native China. In this regard, as performer and teacher (like Bach himself) he pursues a multi-branched career across several continents. He has several critically acclaimed albums of Bach to his name on the Piano Classics label including the Goldberg Variations, Partitas and French Suites.