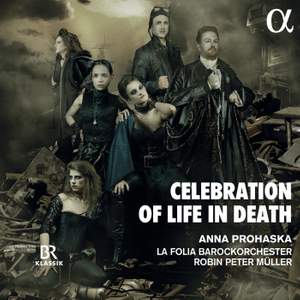 Celebration of Life in Death

A Dies Irae is an apt place for Prohaska to begin her musically wide-ranging exploration of ‘life in death’, and the gloom is leavened by lightness elsewhere. There are early musical delights,... — BBC Music Magazine, June 2022, 3 out of 5 stars More…

Constantly in search of eclectic and meaningful programmes, the soprano Anna Prohaska here celebrates ‘life in death’. An ambitious programme, conceived with Robin Peter Müller and his ensemble La Folia, which takes us on a journey across the centuries and through many different countries, with French chansons of the Middle Ages (including one by Guillaume de Machaut), seventeenth-century Italian pieces by Luigi Rossi, Francesco Cavalli and Barbara Strozzi, German composers of the seventeenth and eighteenth centuries (Dietrich Buxtehude, Christoph Graupner, Franz Tunder) and the English luminaries Henry Purcell... plus John Lennon and Paul McCartney. A musical and spiritual quest that even takes in a detour to North America with a universally known song by Leonard Cohen.

A Dies Irae is an apt place for Prohaska to begin her musically wide-ranging exploration of ‘life in death’, and the gloom is leavened by lightness elsewhere. There are early musical delights, but the ‘Eleanor Rigby’ and ‘Hallelujah’ covers are marmite tracks.

The opening Dies Irae, with Prohaska intoning with hieratic fervour over a drone bass, may suggest that we're in for a pretty gloomy hour, but thereafter there's plenty of edgy vitality here. Tunder's Ach Herr, lass deine lieben Engelein and Graupner's Die Krankheit, so mich drückt are the most substantial works on the album, but miniatures such as Purcell's Since the Pox or the Plague (delivered with manic gallows-humour) and a grave, touching account of Eleanor Rigby pack no less of a punch.