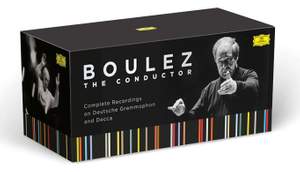 Boulez The Conductor: Complete Recordings on Deutsche Grammophon and Philips

Birtwistle: The Triumph of Time

Stravinsky: Tilim-Bom: A Story For Children

Webern: Cantata No.1 for Soprano Chorus and Orchestra op.29

Homage to a passionate structuralist and exceptional conductor

Pierre Boulez' legacy as a conductor includes plenty of exceptional recordings: his Mahler Symphony cycle, the Chéreau "Bayreuth Centenary Ring " from 1976-1980, his take on classic 20th century composers from Bartok to Stravinsky to mention some highlights. Being a splendid intellectual, Boulez was regarded as a "national cultural institution" in France during his lifetime and celebrated all over the world as a conductor of outstanding clarity, analytical thinking and absolute precision of execution. Boulez is a central musical figure of the 20th century.

84 CD Original Jackets Collection: the first edition to comprise all of Pierre Boulez’ recordings as a conductor on Deutsche Grammophon, Philips and Decca

Includes a legendary staging on video: the unrivaled Bayreuth Centenary Ring by Boulez/Chéreau on 4 Blu-ray Discs in HD-quality, with audio layers in 24-bit PCM Stereo 2.0 and Surround 5.1

The booklet includes full tracklistings, a repertoire index, many photos, and substantial articles in English, French and German by Wolfgang Stähr