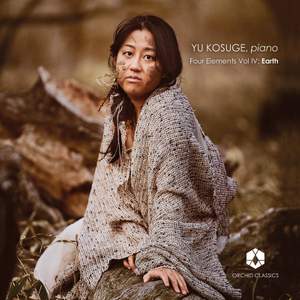 Japanese pianist Yu Kosuge concludes her series of Orchid Classics albums related to the four elements with the final release of the set: Earth. Kosuge was inspired to create this series by the music of Beethoven, who was fascinated by Greek legends, prompting her to explore the Greek concept of the four elements in these albums. For Yu Kosuge, the preceding albums – Water, Fire and Wind – focus on the elements most necessary to a human being’s survival, but with Earth, 'we get close to the human being itself and our own struggles in life'. We come from earth and to earth we return; this album acknowledges the pain and loss of human existence as well as the life-giving properties of earth. The release opens with Schubert’s powerful Wanderer-Fantasie, evoking a solitary figure wandering the mountains, while Janáček’s Piano Sonata No. 1 pays tribute to a Czech labourer, a casualty of military intervention at a demonstration. Contemporary composer Dai Fujikura’s Akiko’s Diary is on a similar theme, recalling a girl who became a victim of Hiroshima bomb radiation: Akiko Kawamoto. The piece ends looking heavenward, a perspective it shares with Chopin’s Piano Sonata No. 3, which ultimately faces human frailty with a sense of hope. 'Apart from technical perfection, which is not that unusual today, she possesses a stunning palette of expression and an exquisite and pearly touch.' Piano News on Yu Kosuge