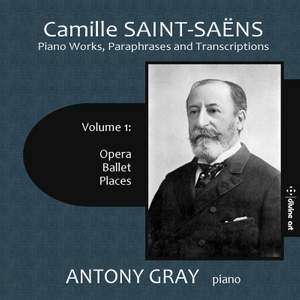 "Saint-Saëns excelled as a composer, conductor, pianist and organist – his composition output is enormous, reaching over 160 titles of which many are substantial – operas, ballets, symphonies – yet today much of his work remains neglected and he is known by a few works only: the Organ Symphony, Samson et Dalila, Danse Macabre and Carnival of the Animals. His original piano pieces are generally light ‘salon’ works but are nonetheless delightful and well formed. His major contribution to the piano works is the equally neglected body of transcriptions (of his own works and those of others) where he was sadly eclipsed by the more outgoing and promotion-minded Franz Liszt. This album and its companion include a number of first recordings, introducing a large body of keyboard gems to a new audience. Volume 1 is divided into two sections: transcriptions from Opera and Ballet, and pieces inspired by specific places. Antony Gray is a London-based Australian pianist and teacher with numerous acclaimed recordings to his name on ABC and other labels including a 3CD set of Bach transcriptions and a 5-disc set containing the entire piano output of Poulenc. He has premiered many new pieces written for him and has often appeared on radio in the UK and Australia."