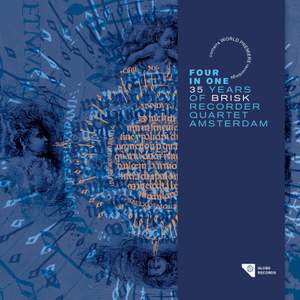 Swart, C: Generations around me

Four musicians sharing their musical worlds as equals: that is an intimate and refined art which requires a huge commitment and deep mutual trust. Four in One stands for four individuals who form a close creative unity while keeping their own identities. That is why Four in One is the perfect motto for the 35th anniversary of the BRISK Recorder Quartet Amsterdam. But this motto does not only relate to BRISK's anniversary, it also refers to the canon, the best-known musical form of four-in-one. By using one melody in succession, a polyphonic whole is created. Canons from Dufay and Obrecht to Brahms, Skryabin and Zuidam constitute the common thread of this CD.

In addition, other imitative forms are presented which have been eagerly used in music history. Thus the finely woven web of voices in Flemish Burgundian polyphony and Bach's fugues also originated in canonical writing. Moreover, Four in One is a showcase of BRISK's rich repertoire, with early music, new work written for the quartet and arrangements of romantic music. The recorder has a relatively small repertoire, but this limitation presents a challenge. BRISK has done everything in its power to enlarge the repertoire, making countless arrangements in the tradition of the instrument.

Organ music has been a constant source of inspiration. Again and again BRISK have been told that sometimes they sound just like a small organ. "It is as if an organ is being played by a player who is awake in all his fingers," a reviewer once wrote about the quartet. Each voice takes on its own colour, and together they are much more than one person playing a four-part piece. It is precisely the personal contribution and the diversity of several players that turn it into a lively whole.

Arranging vocal music, with diminutions and embellishments after historical models, is also one of BRISK's favourite activities. In 1535, Silvestro Ganassi wrote in Opera intitulata Fontegara that the recorder is able to imitate the human voice through articulation and the flow of the player's breath. For this musician and music theorist, that was an ideal to be pursued as much as possible. That approach is tailor-made for BRISK.