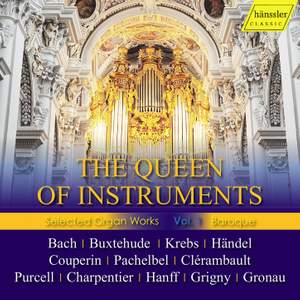 "The history of the organ stretches back to the ancient world. Until medieval times organ instruments have been considered as secular and were used to accompany songs and dances. Around 600-700 years ago the first organs appeared in churches, probably used for supporting and accompanying liturgical chants. In the 16th and 17th century organ building started a sudden high-speed development. New materials, many stops, smooth-running tracker actions and a capable and stable wind supply opened new horizons. For the first time organs could tonally fill large church rooms, accompany the congregational singing and made virtuoso artistic playing possible. Many famous composers started writing sophisticated works of music for organ. This box is dedicated to this great time. CD 1+2: Contains a selection of compositions for organ by Johann Sebastian Bach. CD 3: Organ chorals by Johann Michael Bach, a distantly related contemporary of J.S.Bach and father of his first wife Maria Barbara. CD 4: Four organ concertos with chamber orchestra by George Frederick Handel CD 5: A selection of works by German, French and English composers of the baroque era (J.L. Krebs, J. Pachelbel, Charpentier, Purcell, Couperin, Clérambault, J.N. Hanff, N. de Grigny, Handel) CD 6: The grandmasters of the North German school, Dietrich Buxtehude and Daniel Magnus Gronau"