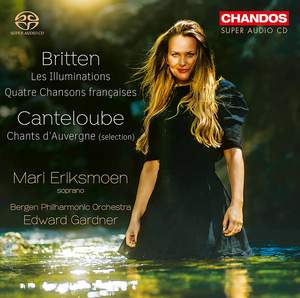 In Britten’s Les illuminations, the generally belllike accuracy of Norwegian soprano Mari Eriksmoen’s singing is more than matched by the expressive truth of her interpretations. She is most... — BBC Music Magazine, January 2022, 4 out of 5 stars More…

Following successful appearances at the Opéra-comique, in Paris, Grand Théâtre de Genève, Oper Frankfurt, Komische Oper Berlin, and Teatro alla Scala, in Milan, the Norwegian soprano Mari Eriksmoen is undoubtedly a rising star. On the concert stage she has made important recent appearances with the Orchestre de Paris, Berliner Philharmoniker, Oslo Philharmonic, and Münchner Philharmoniker, among others. Here she joins the Bergen Philharmonic Orchestra and Edward Gardner for a powerful album of orchestral songs, coupling Britten’s Les Illuminations and Four French Songs with a selection of Canteloube’s inimitable Songs of the Auvergne. Eriksmoen spent a year studying in Paris, and proves an effective and natural singer in the French language. As she mentions in her programme note: ‘It is highly demanding to sing in French when it is not one’s native tongue, but I have always felt at home when singing in French and nurture an emot ional attachment to the French language.’

In Britten’s Les illuminations, the generally belllike accuracy of Norwegian soprano Mari Eriksmoen’s singing is more than matched by the expressive truth of her interpretations. She is most beguiling when floating her voice weightlessly and with a serene joie de vivre in ‘Antique’, perfectly partnered by the lovely violin playing of the Bergen Philharmonic leader Melina Mandozzi.

[Les Illuminations] I can’t praise Eriksmoen enough for the accuracy of her singing, its tonal beauty, and her absorption in the text. There are running passages, exposed intervals, and those chromatic steps to contend with. She faces every challenge with ease...one of the best vocal releases of the year.

if you don’t need a full disc of Canteloube and the unusual Britten pairing appeals, then Eriksmoen fits the bill in these attractive performances.