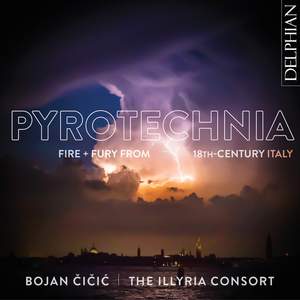 Čičić scarcely needs to prove his credentials through the medium of the virtuosic solo. The recording, instead, traces the impact of the capriccio-cadenza on the concerto form, and its evolution... — BBC Music Magazine, January 2022, 4 out of 5 stars More…

Recording of the Week,  Baroque fireworks from Bojan Čičić and the Illyria Consort

The violinist and his ensemble present four virtuosic concertos, showcasing the legacy of Vivaldi's incredible panache as a performer as well as the earliest origins of what would eventually become the solo violin caprice.

Contemporary accounts of the violin playing of Antonio Vivaldi, the ‘Red Priest’, show the extent to which he raised the instrument to hitherto unknown extremes of soloistic virtuosity – able, in its spontaneity and sonorous brilliance, to hold its own against an orchestra in fiery and unforgettably dramatic confrontations.

Thanks to Vivaldi’s pupils, eager to imitate the master’s wilder imaginings, several of his impro- vised cadenzas have been preserved.

Here, they inspire typically white-hot performances from Bojan Čičić and The Illyria Consort of four violin concertos by Vivaldi, Tartini and Locatelli which all have movements ending in a ‘capriccio’ – a sequence designed to show that the idea of a virtuosic display cadenza, usually associated with the classical concerto of a later period, had already developed during the first half of the eighteenth century. Fittingly, the album’s title is borrowed from John Babington, author of the earliest guide to fireworks published in Europe – Pyrotechnia!

Čičić scarcely needs to prove his credentials through the medium of the virtuosic solo. The recording, instead, traces the impact of the capriccio-cadenza on the concerto form, and its evolution from shortish burst to the finale of Locatelli’s Op. 3 No. 12 (which, at 15 minutes, outlasts either of the Vivaldi concertos in their entirety – albeit with a lot of grandstanding gamely shouldered by the unflappable Čičić).

The Illyria Consort are a single-strings band here but provide a pleasing and lightly transparent orchestral sound where others might have sought something more aggressively beefed up...Čičić sounds comfortable with the music’s daunting technical demands, maintaining its dignity and poise with virtuosity both controlled and humane.

Čičić’s approach – sensitive and fluid, while never less than technically immaculate – shows these unashamedly swaggering pieces in all their ostentatious magnificence.